6 Ways Traveling with a Child is Different

July 5, 2019August 13, 2019Mindset by LindsayLeave a Comment on 6 Ways Traveling with a Child is Different

Traveling is a glamorous thing. Or at least it is in images. Let a close friend tell you the ins and outs of their excursion across Europe and you might get a different depiction. The same is true with babies. Gosh they’re cute. Well most of them are, after about 2 months. Before that they’re all aliens. I digress. Babies, kids, families; they are all beautiful little constructs in their birth announcements or Christmas cards. But if you ask, and have enough time to actually listen, a new mom will gladly spill all the dirty details.

Now, let’s imagine for a second that we choose to combine these two things… travel and younglings. An image of a parent tossing a gleeful child into the air with a backdrop of the Swiss Alps might be the most idyllic thing you can imagine. But it sure as hell won’t tell the story about many hours of Puppy Dog Pals were watched on the plane, who shit their pants in the first 15 minutes of a 4 hour train ride with baby wipes stowed neatly beneath, or how many string cheeses were consumed so that they could make it through immigration without a meltdown.

That image also can’t tell you how, despite the chaos, it was more than worth it.

Living abroad solo was life changing, traveling through South America with my husband was incredible, but traveling with my child feels important. Whether “traveling” means going camping with her so she can crunch different leaves under feet, visiting family in Oklahoma so she can know her great grandparents, or venturing to a foreign country so she can take in the new tastes, smells and sights of a different culture. It all feels critical, important, necessary. And due to the fact that she can barely walk, for now, it’s my responsibility to make that happen.

Before you embark on an adventure with your little one though, let’s take a look at 6 ways traveling with a child is different than it was before the birth of that tiny monster.

When my husband and I embarked on a trip through Central and South America in 2015, we had a budget of $40 per day. We stayed on separate beds in shared hostel dorms, we took public transit and walked everywhere, and we ate at the same arepa stand every night for dinner because we got the most bang for our buck. With a kiddo, they frown on erecting your pack n play in the middle of a dorm where one of your fellow (albeit much younger) counterparts will almost certainly stumble into it in the wee hours of the morning. The reality is you can’t travel in precisely the same manner as before. Sure you can get a private room at some family friendly hostels, utilize public transit when it makes sense, and cook meals in a tiny kitchenette to save some coin. The bottom line though is that babies are expensive and this added expense also carries over to the already expensive luxury you enjoy, which is traveling.

Say goodbye to spontaneity when taking your little one on the road with you. Most kids do extremely well with a schedule and this fact doesn’t change just because you are in a different time zone. They still require regular snacks and naps and time to clean the literal shit off their butts. Remember when we all we needed to sustain us for the day was several glasses of sangria and a light sunburn? Take the time to think through what activities you’d like to do or sights you would like to see and strategically plan them into your day or they won’t happen.

I feel like this one goes without saying. Babies don’t do well with bungee jumping or mountain biking. They can’t yet breathe through an underwater respirator and their trail running skills leave something to be desired. Put these activities on the back burner FOR NOW. This doesn’t mean forever. Or, if you are fortunate enough to be traveling with a spouse or significant other, take turns with the little monster so you can each get that rush of your own.

Speaking of activities… make a list of what you’d like to do or see. Then cut it in half. Inevitably your kid will be more interested in playing in the dirt at the local park than going to the museum. Most certainly you will have to stop the car to pee on your road trip a half dozen more times than you were planning. Back in the day our friends could “backpack Europe” by cramming 18 countries into a two week trip. If such a feat were to be attempted with child in tow, it would simply be a recipe for an epic meltdown. Know the limits of your kiddo (and yourself) and for God’s sake, don’t push yourselves to be the family at Disneyland who just HAD to stay for the fireworks when their little person needed to be in bed 3 hours ago.

I visited 8 countries in 2 hemispheres and ventured from sea level to 15,000ft. over the period of a year and took a backpack. That’s it. Now we go to a friend’s house for a play date and I have to apologize because it looks like we are moving in. Being the kind of person that is on team #onetrip with groceries, it sincerely pains me that I am now also the kind of person that pays two dollars to rent the little dolly at the airport because I literally do not have enough extremities to haul all of our her belongings from the baggage claim. And I consider myself a minimalist. (While some of this is exaggerated for readability and humor, it is indeed your new reality. Click here to download your free packing guide to at least make the overwhelming amount of stuff seem more manageable.)

Visiting Grandma in the same house she’s lived in since you were a child? New.

Boarding an airplane for the 114th time? New.

Landing said airplane? New enough to them that they are tempted to clap upon landing but you wrestle their little arms down because you don’t want to be THAT person.

Jumping into the swimming pool at the hotel that is right across from the beach? New.

I am assuming that if you are reading this blog, you enjoyed traveling before birthing a child and therefore many of the places and processes involved are old hat to you. But if there is one thing I have learned from being a parent for a very short 14 months, it’s that experiencing those same old things all over again through the eyes of your tiny child is kind of magical. 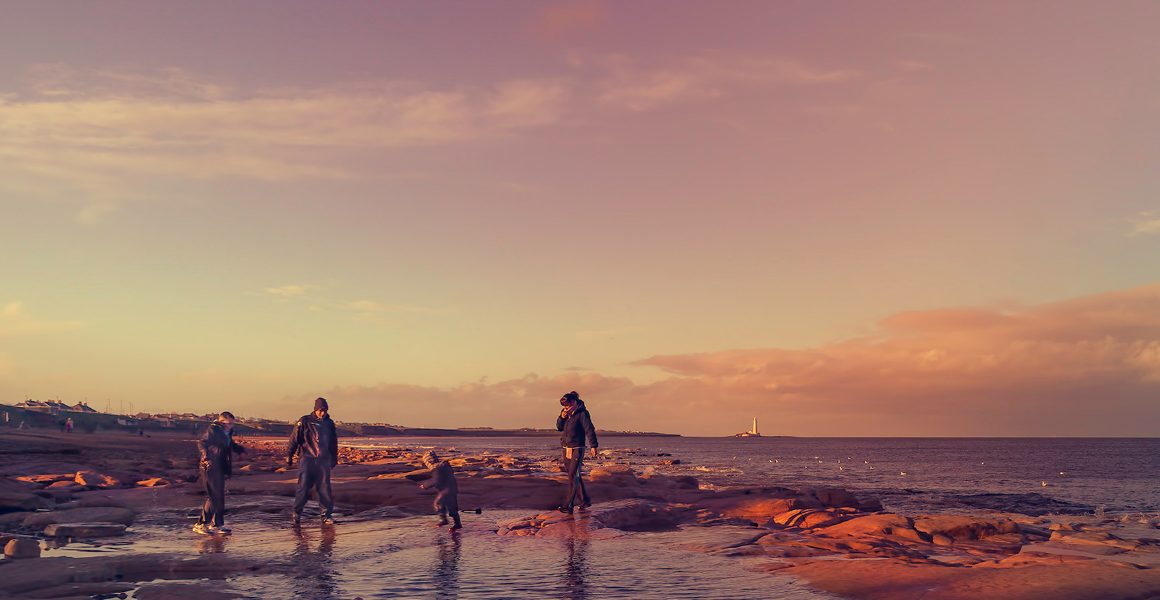 1. Adjust your Expectations “Expectation is the Mother of Frustration.” – Antonio Banderas (side note: how is that quote attributed to Zorro when it sounds like a Chinese Proverb?) I harp on this topic often. I believe that pain exists in that discrepancy between reality and expectations.  Two people expecting two very different outcomes […]